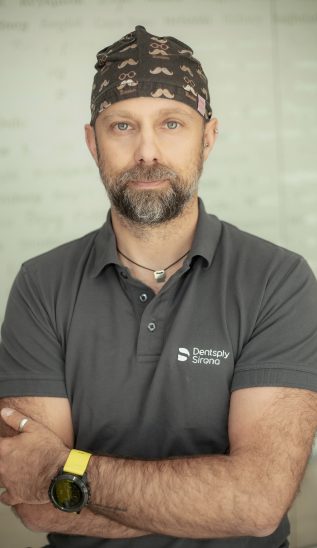 Implantologist, graduate of the Faculty of Medicine and Dentistry at Wroclaw Medical University (licensed to practice his profession since 2001). He completed postgraduate studies in the field of

“Healthcare Manager”. He is a member of numerous prestigious Polish and foreign scientific associations including the Polish Association of Implantology (PSI), Central European Implant Academy – (CEIA), Deutsche Gesellschaft fur Oral Implantologie (DGOI) and International Congress of Oral Implatologists (ICOI). As one of the few Polish dental professionals, he graduated from the prestigious Implantology Curriculum at Johann Wolfgang Goethe-University in Frankfurt (2009). The highest quality of performed procedures and patient safety are a priority for him, so he systematically extends his knowledge and skills by participating in numerous courses and congresses in the field of dental surgery and implantology.

Lek. dent. Paweł Bernatek participated in an advanced implantology course organised by the Laboratory of Implantology at the Institute of Dentistry of Jagiellonian University Medical College and Central European Dental Implantology Centre; moreover, he attended the medical course entitled “Implants: Idea – Workmanship – Practice. Innovations in clinical practice”. He has completed training in Biomet 3I and Ankylos implant systems. He also widened his knowledge during courses and training events abroad, among others in Frankfurt and Seoul. He regularly attends Central European Implant Academy symposia and took part in the 2nd Czech-Slovak-Polish Symposium on Oral and Maxillofacial Surgery. His main professional interests focus on implantology and dental surgery. To his patients, he offers restoration of missing teeth with modern implants, as well as dental surgery procedures, including sinus lifts.